Towards the end of my undergraduate education I began experiencing intense migraines that would put me out of commission for an entire day, and at this time it was about once every three months.  These head splitting migraines became a more frequent occurrence during Chiropractic College, and every time it happened, I could pinpoint the same spot on the back of my head where it seemed like the pain was coming from.  Over the years I had seen multiple medical doctors, been adjusted by several chiropractors, and each one took their own approach to treating this ongoing condition a seemingly healthy young man was experiencing.  But one thing none of these doctors ever did – was take an X-ray of my neck to be able to see what is really going on.  Each doctor had their own theory as to the cause behind these migraines, and treated me as such.  The problem was that I seemed normal (enough) on the outside that there was no reason, in their eyes, to order any diagnostic imaging (X-rays, MRI, CT scan).

During Chiropractic College I finally got an X-ray taken of my neck by a Chiropractor who shoots X-rays on every person before they adjust in order to take specific measurements for the type of chiropractic adjustment they perform.  Some people bash doctors like this saying they’re only doing X-rays on every patient so they can charge more money, but I can assure you based on what was found on my X-ray that this is not the case.  With X-rays and all other types of diagnostic imaging, you also are responsible to look for anything else out of the ordinary captured in the shot that could be contributing to their symptoms, or maybe something underlying they didn’t even know about before it causes symptoms.

What you can see in the picture below is what’s known as a paracondylar process.  This bone that looks like a shark tooth is an extra extension of the occiput bone that shouldn’t be there at all, but for whatever reason my body decided that was a good idea…and to only on put it on the left side.  The really interesting part about this is that the location of this bone happened to be the exact location where I could pinpoint the migraines I’ve been experiencing for years!  With this new information I was able to have a better understanding of what was causing my symptoms, and re-evaluate my treatment plan.

The moral of this story is not that if you have migraines you may have an extra bone in your head…I just want you to understand that it’s not normal to feel pain or any type of symptoms for that matter.  If you don’t know what’s causing your symptoms, and you’ve tried multiple treatments with no improvement, you need to consult with your healthcare provider and get the diagnostic imaging you need to figure out what’s going on with your body. You never know what you’re going to find, unless you look. 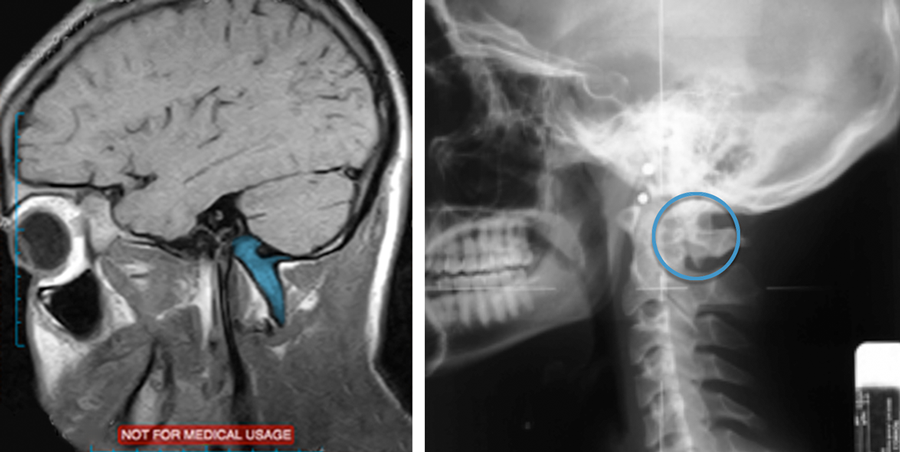 previousIs that you, or me!?